After getting the YD-2 together I ran it on my basement track some but was never very happy with the way it ran. Friday evening I took it to Prolevel RC which has a drift track and ran it there. Didn’t run much better there either. Compared it to Micheal L’s new YD-2 that he has had a week longer than mine. On the track the front wheels were hitting the shock on full lock so the shocks were moved in one hole. Appeared that there was a gyro issue, when the rear would swing out the front wheels would go the opposite way not into the direction of the rear swing. Normally reversing the gyro fixes this but it made no difference. Had 2 gyros and both were doing the samething. The gyro was taken out of the picture and the front wheels would still move when you swung the rear end. Now the light goes on, I had installed my 4 channel AVC rx so I could control the gyro from the TX. When I bound it I thought that I disabled AVC but in fact I didn’t hence the issue. Activated AVC and left all the settings at 0% and the SkyRC gyro started working correctly, the Yokomo gyro still was wrong and would only work if you turned it upside down. Now we had a gyro and the front wheels weren’t rubbing so things were getting better. It drifted much better but still nat as good as Mile L’s even with him driving it.

Upon further examination it was discovered that I had the front lower A-arms reversed left & right. Switched them around and things started getting much better. While I was at it I took out the AVC rx as I didn’t have 2 Bind plugs which was need to disable the AVC, put the 2 channel rx in it’s place. Now it was drifting much better. BY this time it was about 9 pm and time to head back down south to the house.

Ran it a few times on the basement track and it was much better I was able to do decent donuts with a little practice. During the week a new rule came out the you had to have a body. Working on an Escalade body for it but it isn’t done. Looked through the bodies I had laying around and came up with an old 1958 Chevy body that I used to have on a gas buggy. Drilled a couple for holes in the bed for the rear mounting post. Put some extensions on the front to hold the front end off the tires. 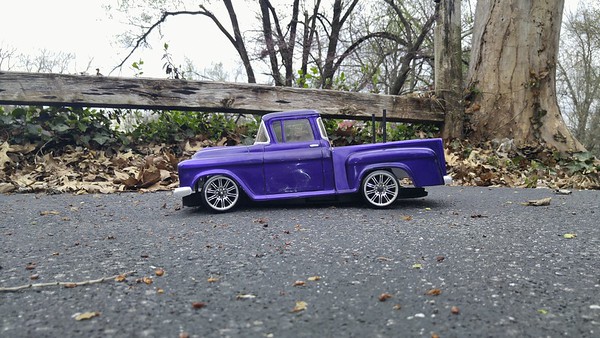 This Friday we went back to Prolevel RC for a little more drifting on the track. It was drifting okay but not good so I played around with front tires/ Ended up using the MST golds on the front. As the evening went on I could see the difference in the way it was drifting. Not it wasn’t doing anything to correct itself the driver was getting better as the evening wore on. After about 2.5 hours the battery was dead. Not enough time to charge it and currently only have one battery for it so we packed up and headed for the house.

Ran it some more on the basement track doing some figure 8’s and ovals. I think at this point I can drift better with the YD-2 RWD than I was with the HPI Spring 2 AWD. needless to say I am very happy with my Yokomo YD-2 RWD.