When I first say the information about the Team Associated SC28 I thought it might be a good truck to run on the upcoming RCP style track. So when I saw them available at Tower Hobby I ordered one. Took about a week to get here. It’s a RTR and is ready to go out of the box, even the AA batteries for the transmitter are included. 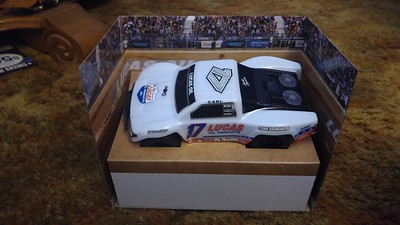 Pulled it out of the box hoping there was some charge in the battery so I could take it out and try it. All I had to do was put the 4 AA’s in transmitter and off I went to the patio test track.

The cord you see hanging out of the TX is the charging cord for the SC28.

I have a couple of the HPI Q32s and the SC28 looks very similar only a little larger so I really didn’t know what to expect. Because the Q32 steering only has 2 gears and a rack it handles a little strange at times and can be twitchy. A couple of laps around the track with the SC28 and I knew it wasn’t a bigger Q32, it drove much better. You could give it some gas without having to make steering corrections. It tracks straight and the steering response is good. It’s not what you would call a speed deamon but is plenty fast for it’s size, for an a small track like mine I wouldn’t want it much faster. I was able to run it for around 9 minutes with the charge that had on it out of the box, which I will guess was the storage charge that a new lipo come with normally. After running the battery down I hooked it to the TX charging plug. The green charging light came on and 57 minutes later it went off. BTW: the manual says the green light some one when the battery is fully charged and this is incorrect. 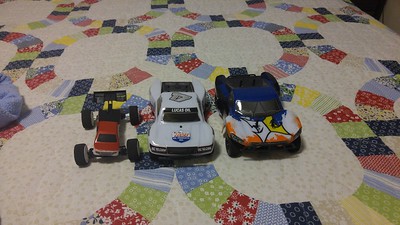 The tires that some on the SC28 are actually bigger than what’s on the Torment. The SC28 tires are about the same size as those on the Losi Rally X.

Nowhere could I find any specs on the battery nor whether it had a servo or not so I lifted the top and took a look for myself.

As you can see in the picture it has a mini servo which explains the better steering. You can also see the esc/rx combo which is the norm for these small scale machines. Lift up the esc and you get a peak at the 150mAh 1s lipo battery that powers this little deamon.

This looks like some of the same batteries that I use in some of my quads. It would be a pretty simple task to cut this battery out, solder and end on the leads that come off the esc and also on the battery and you would have a battery that you could remove and charge. There is plenty of room on the top of the chassis to mount a battery using velcro. I would think that even with mod you could still charge the battery using the TX is need be. Moving the battery from low in the chassis pan to the top of the chassis would definitely change the center of gravity some but how much remains to be seen.

Because of the weather I haven’t gotten to drive this little truck as much as I would have liked but the little bit I have driven it I have been impressed, So much so when I saw then at Tower the other day for $35 with coupon I grabbed another one. After all a fellow can’t have to many toys. Can’t wait til I get my inside RCP style track done some I can put some more time on the little guy.