About 2 winters ago I got into micro indoor crawling. I bought 2 Orlandoo 1/32 scale crawlers, a Jeep CJ & Pajerio. Nice and detailed kit and fun to build but it was also a challenge with the little bitty parts and my big paws. I made an indoor course for them but neither was that good of a crawler and after getting them and the track finished I lost interest. So they sat for a about a year or so then I sold the Orlandoos and threw the track out.

Wanted to give mini crawling another try so I started looking at the SCX24 which is a little bigger and after looking at several Youtube videos and reading comments on the forums I decided to get a SCX24 and give it another try. Picked one up today at the LHS. 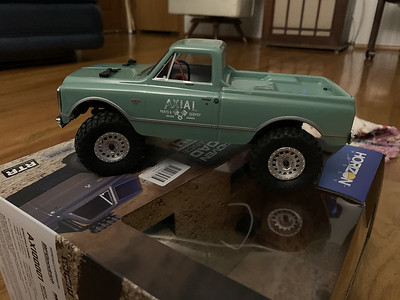 Choose the teal green ’67 Chevy C10. I like the looks of it and have driven pickups most of my adult life including a ’69 teal green Chevy C10 stepside. Upon arriving home I unboxed it and installed the batteries in the C10 and the TX. Threw some of the Great Grand Daughter’s toys out on the living room floor and started crawling. The little feller crawled over about everything that it came across. I was pretty impressed. The suspension was a little springy but I guess that can be expected when it doesn’t come with oil filled shocks, this is a pretty easy fix.

This evening I took it down to the RC room and made a few adjustments. For one I tightened up the screws for the body tilt so it wouldn’t fall down so easy when installing the battery. 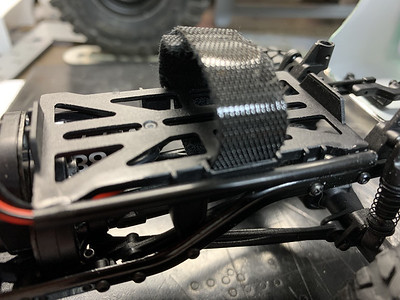 I then glued and antenna tube along side the battery tray so the antenna wire wasn’t flopping around in inside of the truck. The next thing was to cut the end off a Q-Tip and put a little Lucas Red & Sticky grease in each shock. This isn’t as good as oiled filled shocks but better than bone dry. Puts just enough friction in the shock to take out a lot of the bounce. Now I need to build another inside course for this winter. I’ll take the little guy down to my 1/10 scale crawler course in the backyard and see how it does but not expecting out much, though it might fool me. 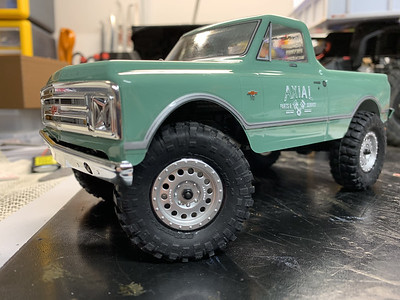