Updated my PowerSpec Duplicator I3 Plus to a Creality Ender 3 v2. It comes unassembled and it took about 2 hours to get it assembled. The instructions that came with it leave a lot to be desired. You are basiclly following pictures that don’t really show where things go. There are several YouTube videos that can guide you through the assembly but I didn’t use any in the assembly.

Had several issues that added to the time. One was one of the screws that goes into the X rail stripped. I removed the lock washer and added a little Locktite and it was fine. The next issue was it wasn’t clear how to added the belt tensioner. I puller the hot end off the X rail removed the belt, put in the tensioner wheel and put it all back together. In hind site I should have just removed the screw holding the bearing, inserted it into the belt look and reinstalled the screw. Would have been much faster in the long run. The next issue was getting the X rail level. This turned out to be easy to correct. Loosen the screws on the right end lift up the rail and retighten the screws. The last issue was the bild plate was loose on the Y axis. After doing a YT search and finding nothing. I took the plate off by removing the 4 bed leveling screws. I then found after taking one of the rollers off that it mounting hub was concentric. Put it back together and used the concentric adjuster to tighten the build place. Reassembled and proceed to leveling the bed. After several trips around the bed with a 1/3 sheet of copy paper as a spacer and it was time for a test print.

The Ender 3 comes with a copy of Cura for Windows. Being a Linux & Mac guy that wouldn’t work for me. I normally use Prusa Slicer so I added a new printer and choose the Ender 3 profile. Loaded the CailCat and sliced it at 0.2mm. Don’t have Octoprint hooked up yet so I copied it to the included SD card. Started to print and discovered I hadn’t loaded and filament. The filament has a little curve to it coming off the spool. Discovered by using a cut off length that if you hold the curve towards the rear it goes in fairly easy. The Ender 3 v2 come with a little wheel to turn the extruder to load the filament but it wouldn’t work for me. I had to push the lever and do it the old fashion way.

Okay now we’re ready to print. Using the menu I loaded the CailCat into the printed and off it went. After about and hour the CailCat was finished. I compared it to the CailCat that I printed the other day on the PowerSpec. I used Hatchbox PLA Orange on both prints. The Cat that came off the Ender 3 was much better in all respects. 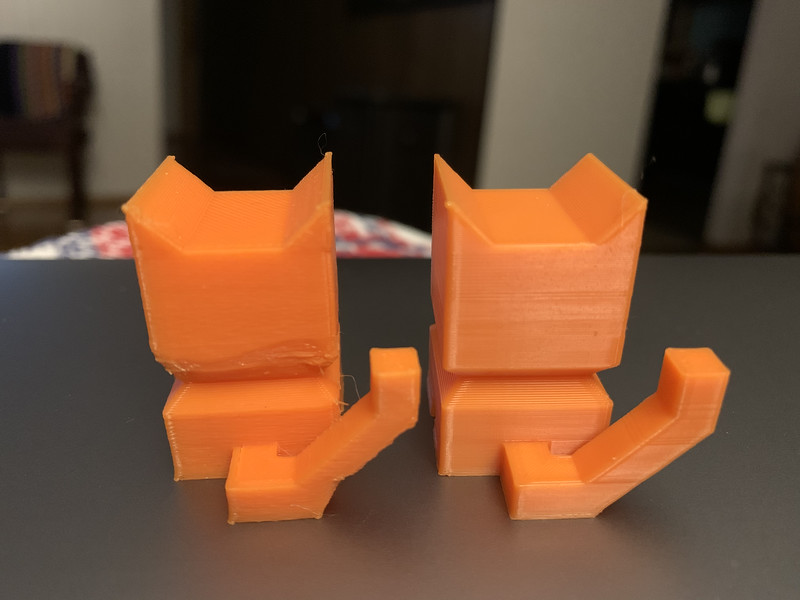 The cat from the PowerSpec is on the left. The one on the right the Ender 3 v2

You really can’t hear the printer printing like you could with the PowerSpce. This is not to say that it quite. The loudest noise was the cooling fan on the power supply. For me that really isn’t an issue the printer is in my hobby room which is in the basement so it doesn’t disturb other members of the family, mainly the wife.