The diff gears for the STRC iZillia came in today so I torn down the differentials today and installed the spider gears so now iZillia has open diffs and should turn better.

Replaced the stock Wraith steering linkage with STRC Steering Links. I don’t think the stock plastic links would do a good job turning the the Proline Destroyers.

It’s getting there, I have the rx & esc for it but haven’t installed them yet waiting on the BEC. 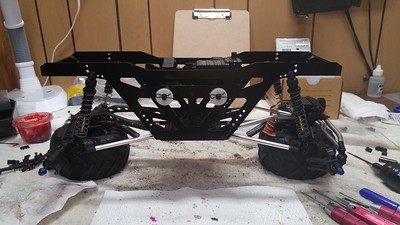 I watch my friends Dan & Ross race, Ross had a brand new Axial SMT10 Grave Digger that was 2 days old. I stood there watching all the rounds and took some video too so I could watch it later. Needless to say while I was there I caught the monster truck bug. On the ride home I was thinking of what I had that I could convert to a monster truck. I knew that the AX10 Deadbolt or Ridgecrest could be converted and I had an AX10 Scorpion so I started making my parts list for the conversion. I then discovered that my AX10 didn’t have the AR60 axles but had axles more like a SCX10. Okay scrap that idea, no the bug wasn’t gone I just needed to travel a different road. While cruising the RC Buy/Sell/Trade ad I ran across a new STRC izillia Monster Truck chassis for a good price. Made the deal and it was on it’s way. Now I need a Axial Wraith slider which basically would give me the drivetrain & suspension from the Wraith that I need for my new monster truck. Put an ad up on the FB St Louis RC Buy/Sell/Trade group and about an hour later I get a call from my friend Dan he has a truck that he was going to build into a mud truck that would make a good monster truck. It has the same chassis as the one I just bought. 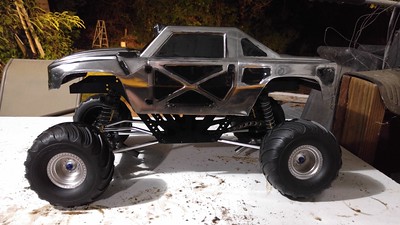 We talked for a while and made a deal. Last night he delivered my new monster truck slider. Didn’t have the wheels and tires on it those I had and are from a Traxxas Scully. It will have a set of Proline Brawler 2.8 wheels and Destroyer tires on it when finished.

We will continue this story as the new truck takes shape.