Gramps Ramblings is just my personal blog and a depository for things I don’t want to loose. It’s also a place for me to rant about things that get under my saddle, at times you just need a place to get things off your chest.

I now do most of my websites with WordPress and many times I don’t want to muddy the waters of a working site to try something so I also use Gramps Ramblings as a Sandbox for WordPress plugin and ideas. So don’t be surprised if you drop by and things look totally different. I maybe working on a new theme for another site or playing with who knows what.

If you ended up here looking for partsanthigns.com your browser isn’t messed up that this the domain name that this site use to use. Your not lost we just don’t maintain that site any longer.

Charging 1s lipos is a pain, they typically last 3 minutes give or take so you can go through some batteries flying in an afternoon. 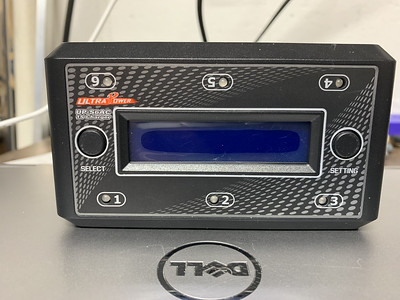 Picked up a UP-S6AC which charges 6 1s batteries the difference being is that it charges each battery independently so they can be any capacity or discharge state. It will charge both Lipos and LIHVs and at the same time. I set it to .3a charge rate which shouldn’t hurt any of the batteries I have, it can be set from .1a to 1.0a the charge rate is the same across all 6 ports. After testing it to be sure it was operating correctly 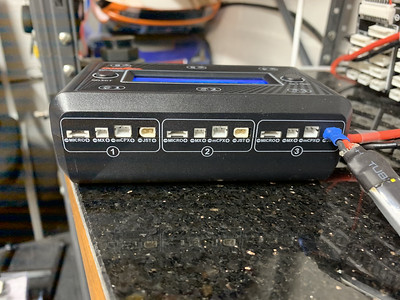 I can’t figure out why I waited so long to buy one of these chargers at $27.99 from RaceDayQuads it was well worth it. Don’t think my iCharger Duo 410 will be getting much use when it comes to 1s batteries.

Turned out to be an interesting afternoon. Was out flying the Shutterbug85 on the 2nd battery I was doing rolls & got it bouncing off tree limbs. Finally came to rest on a limb, disarmed, armed hoping to be able to fly out of harms way. Instead it hit the ground upside down & would not turtle over. 😩 Walked down towards the back end of the yard. Luckily when I built it I put a beeper on it, so I could flip a switch & hear it. Went back to the house to look at the video to get a better idea of where it was, no video the sad card wasn’t all the way in. 😞

Went back down & looked some more, still nothing, so I decided I needed to go down it the creek to look for it, so back to the house to get my hiking boots & Jackie. Gave Jackie the radio & I went down in the creek. From down there it sounded like it was on top. Kept having her trip the beep & I chased the noise. Finally decided it was coming from the other side of the creek so I started climbing the far bank. She beeped I listened finally I was getting closer. Finally saw it laying on it’s back against a tree. Getting out of the creek sucks so I decided to walk the fence looking for a way over or through. Down between the 2 strip centers I found a gate. So I started waking back. Got to Steak n Shake & my sweet wife turned the corner to pick me up. Hope I don’t go through that again. At least I found it. 😊

goes for $1149. I did find an open box Mavic Air for $765 at Micro Center but didn’t have the cash to buy it and I couldn’t talk the CFO into funding it. I’ve been selling off RC stuff that I no longer use trying to get the cash. Well low and behold last Saturday I can across a good deal on a used Mavic Air FMC including a set of ND filters for $550 so I grabbed it before someone else did. Sometimes you just have to be in the right place at the right time. Now I’m waiting for the mailman to drop it off at my door. According to tracking it should be here Friday Dec 27. 2019. Was out of my control but I missed maybe 4 good days for flying. Still got a couple before it turns back to winter. So while I’ve been waiting I have been reading the Mavic Air thread on RC Groups and watching Youtube videos trying to learn all I can about it. Still the best thing will be stick time,